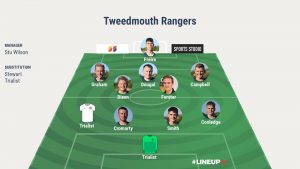 Easthouses prepared for their forthcoming first ever Scottish FA Cup tie with victory in the summer sunshine, all but one of the goals coming in the first half.

The visitors looked comfortable early on and nearly took a 12th minute lead after Jack Forster’s ball to Regan Graham but from the narrowest of angles the captain’s shot scooted along the front of goal and outside the far post.

However, Tweedmouth had to wait only a little longer to go ahead. Making his competitive debut after obtaining international clearance, Portuguese forward Miguel Freire found himself with time and space after picking up a stray Easthouses pass. Opting to fire from beyond the ‘D’, he looped the ball over keeper Stephen Hay into the bottom corner of the net.

This lead didn’t last as, for the second successive game, Rangers conceded four goals in an approximately 20 minute spell. Easthouses took advantage of a a firm, fast pitch with quick balls and fast running which had the Berwickers’ defence in all sorts of trouble leaving goalkeeper Mark Walters exposed. Playing as a trialist, the former Berwick Rangers man was Tweedmouth’s third different custodian in as many matches. The odds were against him when Ty McLean, in the clear, opened the home account.

Two minutes on, Gary Shearer hit no. 2 after the Lily speedily broke downfield. David Arthur began the move for the third goal by sending the ball over defenders’ heads to McLean. Ryan Weston got the second touch to the right winger’s cross and tucked the ball in by the post. Another cross from McLean enabled Stephen Nethery to make it four with the simplest of headers.

Hay was forced to save with his legs after Sean Campbell drove forward as Tweedmouth sought to reduce the deficit before the break.

Share of possession was fairly evenly divided in the second half in which Rangers looked much tighter at the back with centre backs Kieran Cromarty and Evan Smith getting through a ton of work. Walters also rushed out to make some of his trademark clearances to add to several good saves including one with one hand from Jonathan Crutcher after man of the match McLean again made the running.

Tweedmouth were inside the home half often enough but couldn’t make any real impact. The second half seemed destined to finish goalless until the hosts were awarded a penalty five minutes from time. Walters rushed out again but brought down Alistair Elliot. Paul McDermott converted from the spot.

Pictures : None today, TRFC photographer not at game.