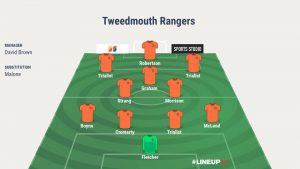 Malone – on for Trialist 50 mins 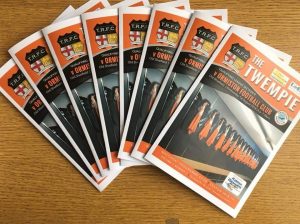 We went in to our second fixture in the Qualifying League on the back of an encouraging season opener against Lothian five days earlier. On a wet miserable night at Old Shielfield we were again short on players with 9 unavailable through work, holidays, suspension and international clearance…

Tweedmouth started the night the brighter of the two sides, with plenty of the ball. As the half went on Tweedmouth grew in confidence and had Ormiston pinned back for large periods. We forced some good saves from their keeper, but were also wasteful In front of goal. As we continued to look for the opener it was Ormiston who took the lead against the run of play. A deflected ball in from the left fell kindly for their striker and he made no mistake from 8 yards with a powerful strike through Fletcher on the half hour mark.

Tweedmouths heads dropped and Ormiston came right back in to the game. Now it was them enjoying a good spell of possession, but didn’t create much with it.

The second half started fairly even. Tweedmouth were positive, and again spurned chances, but were getting closer. We pressed and a punt forward over the centre backs was met by the big Ormiston striker leaving him one on one, and he coolly wrapped it around the keeper on 55 minutes.

This lifted Ormiston massively and they went on to enjoy their best spell of the game, hitting the post soon after. Tweedmouth battled on and good work from trialist Lawrence down the left side, he beat his man, whipped in a good cross for Robertson to shoot past the keeper. Game on.

Ormiston were then reduced to 10 men for the last ten minutes. We tried and pushed body’s forward. Went close several more times but just couldn’t score after their number 10 received, much to his surprise, his second yellow. Definitely a game of missed opportunities for Tweedmouth after a bucket load of shots and corners throughout the match.