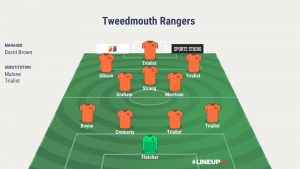 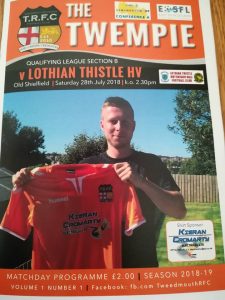 Rangers opened their season this week with a home fixture against Lothian Thistle in the qualifying cup. With a large part of our squad unavailable and the quality of the opposition this was always going to be a tough test, that said the first 10 minutes were very evenly contested until a free kick on the edge of the Tweedmouth box saw the visitors squander a real opportunity from a free header at the far post. This seemed to wake Lothian as they gradually began to dominate the rest of the first half possession and create chances, Rangers battled hard to defend but came undone in the 40th minute by a bullet of a shot from outside the area by Thistles number 8 Kevin Brown. Then on 44 minutes the home side were hit with a sucker punch when Browns 2nd goal came courtesy of a miss hit cross which beat the keeper with an assist from the wind.

Straight after the break Thistle tried to extend their lead but failed to capitalise on another free header opportunity. After that Tweedmouth with the wind behind them started to push back and matched their opponents for most of the 2nd half and could have halved the deficit were it not for a quick response to an attempted lob from the visiting keeper. In the dying minutes of the match both teams could have scored with Thistle hitting the woodwork and at the other end the usually reliable Cromarty putting his header straight at the keeper. The scoreline was disappointing but the performance was encouraging as we move on to play Ormiston in the same competition on Wednesday.