TRFC Man of the Match : Fletcher 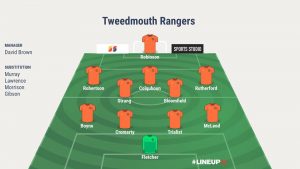 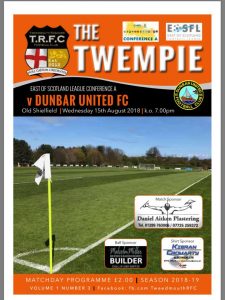 This was the opening game of the new look EOS league but for Rangers the game pattern was to be the same old problems. The game was to and fro for the first 10 mins before a Dunbar player stepped inside from the left wing and placed a nice shot in from the edge of the box, almost immediately Tweedmouth heads went down as 2 minutes later the visitors added another again from the edge of the box into the top corner. As if to highlight how easy it was to score another 2 mins after kick off the opposition cut in from wide right and simply passed through to the back post where an unmarked player had a simple tap in. On the 20 minute mark Rangers compounded their own misery when a long ball across the back line found an on running Dunbar striker for an easy 4th, then on 25 mins Tweedmouth played a long ball down the right which led to their first shooting opportunity of the game, this led to a 10 minute spell where the home team almost found their feet this was until a poorly timed tackle in the box gave Dunbar another easy opportunity to widen the gap which they took with ease.

Into the 2nd half and with the home team 5-0 down and struggling to keep any meaningful possession it took Dunbar only 7 minutes to extend their lead from a beautifully struck free kick into the very top corner, things could have been a lot worse as the visitors saw 2 goals in quick succession ruled out for offside but their relentless attack was rewarded with 2 more goals both coming from home errors. Things at old Shielfield will have to pick up quickly or it’s going to be a long long season ahead. Our apologies to paying supporters but please don’t lose faith as we won’t.

On a positive note off the pitch the tea bar is now up and running and proved a hit last night.