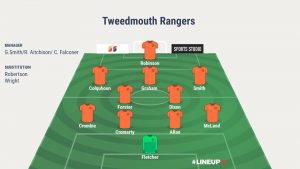 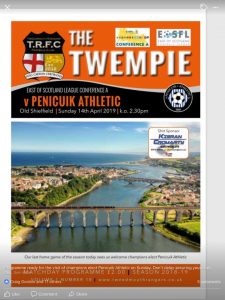 A cool, grey day and an international match to cover as Penicuik visited Tweedmouth over the border with important points at stake in the race for the Conference title and after only two minutes, Caddow of Penicuik was warned for dissent by referee Allan after complaining about a free kick awarded against him. However the visitors mood was better two minutes later when Stevenson struck a 22 yard free kick up and over the defensive wall and keeper Fletcher, the ball shaving the crossbar on its way in to give Penicuik a dream start. After six minutes a Baptie corner found Williams for a free header from six yards but it went straight into Fletchers hands. Good interplay between McIntosh, Crabbe and Baptie in the twelfth minute saw the latters dangerous cross well blocked for a corner by home No 2 McLeod and from Baptie’s corner, Caddow arriving late on the edge of the box volleyed over. After eighteen minutes Ponton got on the end of an excellent cross to the back post but a disappointing header didn’t hit the target, and a minute later McIntosh skied another decent chance high over the bar.

Penicuik for all their dominant possession certainly hadn’t brought their A game and passes we’re going astray all over the place with Tweedmouth also working very hard to hassle and frustrate the current Conference leaders. Then a pass from Baptie put McCrory-Irving in to the box on the angle but the drive was deflected wide for yet another Penicuik corner and from the corner, Young was penalised for climbing. Baptie then set up another chance for McCrory-Irving who took the shot first time rather than taking a touch and this effort also went high.

Tweedmouth were under almost constant pressure with their only out ball being No 9 Robinson but he had little support when the ball came forward and Penicuik’s defence simply were not being tested. After 38 minutes it was McIntosh’s turn to head another decent chance past the post without working the home keeper, and three minutes later his frustration finally got the better of him and the Penicuik No 9 was needlessly cautioned for dissent after a foul was awarded against him. After 43 minutes a rare half chance presented itself for the home side with Graham racing past Robinson and looking to be played in, but Robinson delayed making the pass and was crowded out. Just before the break, Ponton and McIntosh combined on the edge of the box to provide a shooting chance for Connolly and McIntosh tried to re-direct the shot but Fletcher got down to make the save. After a great start, Penicuik would be very disappointed at not having turned their territorial domination into a bigger advantage due to a combination of wasteful finishing and poor passing but Tweedmouth were proving a tough nut to crack, working hard to close down and harry their opponents all over the park, 0-1 at half time.

With a minute on the clock in the second period, Caddow struck a speculative drive from around 28 yards and the ball arrowed into the top corner of the home net for yet another perfect start to the half for the visitors. Two minutes later McIntosh set up a shot for Baptie whose shot was well saved by Fletcher with Caddow right there for any mistake. After 58 minutes Penicuik had a free kick in a dangerous wide position but Stevenson put the ball straight into Fletchers hands, but three minutes later his delivery was much better and it saw McLeod make a decent clearance at the expense of another corner. In 65 minutes Caddow delivered yet another cross but this time McIntosh handled whilst controlling the ball and the game was whistled dead and shortly afterwards substitute Somerville flashed a 20 yarder wide of target, with Stevenson also firing wide from roughly the same distance a minute later. After 72 minutes a Stevenson corner dropped right onto the head of Connolly six yards out but it looped onto the top of the home net. However with fifteen minutes left the game was finally killed off when a back post cross was headed back across by Somerville and McIntosh controlled it nicely before finishing in the corner from about 15 yards. A brilliant last ditch tackle from Tweedmouth’s McLeod from an effort by Sampson after 81 minutes typified the determination shown by the home side, denying an almost certain goal. A minute later keeper Fletcher pulled off an outstanding tip over up in the top corner to deny Ponton from just outside the area and Tweedmouth were looking a bit tired now but still fighting for everything. With the ball still out of play, Page of Penicuik and McLeod of Tweedmouth became involved in pushing and shoving off the ball along with a number of others, but McLeod then seemed to bring his head forward and after the dust settled, Page was cautioned for his part in the stramash whilst McLeod spoiled his very good game by being red carded by referee Allan who was left with little option.

With a minute to go Fletcher pulled off another excellent full length save low down at his right hand post in pushing McCrory-Irving’s twenty right drive wide for a corner, but from the kick Connolly bulleted home a header for the fourth goal from a great Somerville delivery. Right on the 90 minutes, Fletcher performed yet another minor miracle in somehow adjusting to tip over a McIntosh effort which was deflected in flight and the same player was denied a minute later when home defender Cromarty put his body on the line to block the shot. In the end it was job done for Penicuik who keep the fate of the Conference firmly in their own hands but this was definitely not the walk in the park some might have expected. Tweedmouth continue to learn quickly at this level and finish their first season next Saturday at Dunbar, having once again given an excellent account of themselves against a Penicuik side who have proved to be a class act this season.