TRFC Man of the Match :Fletcher 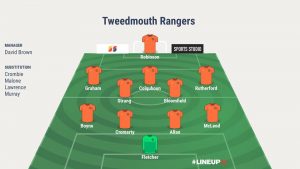 Saturday 11th saw Tweedmouth travel to Bo’ness for a tough 1st round draw in the Alex Jack cup, the draw became even tougher when the home side headed home on 4 minutes. This was the start of a whirlwind 15 minute spell which saw a rampant Bo’ness net another 3 before a long ball break away for Rangers found Jake Rutherford 1 on 1 with the keeper and reduce the deficit.

This glimmer of hope lifted the away side who enjoyed a better 10 minutes before a contentious incident where the home striker appeared to push a defender into the keeper before scoring, the referee saw no wrong doing and the gap was back to 4. Less than 2 minutes later Bo’ness were awarded a penalty suspiciously close to the edge of the box but young Fletcher pulled off a fine save, with half time approaching an innocuous free kick from midfield was driven in to find a free Bo’ness head for their 6th and with one more half chance at either end that’s how the half ended.

The home side came out all guns blazing in the 2nd period and blazed a shot over in the first minute but creating chances all the time soon saw them add another 2 to their tally before the 60 minute mark. On 65 minutes a rare foray into the opponents box saw McLeod brought down for a penalty which was despatched into the bottom corner for Rutherford’s second, this was not the end of the goals as the dominant home side added another 2 headers on 75 and 86 minutes to end the tie 10 – 2.

The Alex Jack trophy will just have to wait another year.