On their second trip of the season to Fife, Tweedmouth travelled to the rustic venue of Treaton Park in the village of Star to face unbeaten opposition. It looked bleak for Rangers when they found themselves two goals down after only eleven minutes but there was to be no more scoring until well into the second half. Tweedmouth steadied plus rode their luck in defence and with a little more of their own going forward up the gentle slope might have pulled back a goal or two before half time.

Lewis Payne struck first in the 3rd minute, the second home player to get a touch following Ricki Cooper’s high free kick from out left. Payne looked set for a second goal minutes later but keeper Danny Fletcher positioned himself to block the shot.

It was left to Jason Watson to claim the next one. Tweedmouth had a throw in deep inside their own half but the ball soon went astray giving Watson his chance.

Fletcher tipped another shot over his bar which was also to become the destination of efforts from Cooper, Jason Watson and Ross Balmer. Rhys Dixon cleared a header off the line. Evan Smith, on his second debut after re-signing from Coldstream, came to the rescue stepping in to halt Balmer’s advance.

Shortly after Hearts went 2-0 up, Jay Baverstock picked up a poor kick from goalie Calum Brodie but judged he was too far out to aim for an empty goal and opted to pass. Jamie Heath was more direct as he tore up the left, riding a tackle on the way, to win a corner. He came even closer, stabbing the ball just past the post as he looked to cap a Smith, Baverstock, Regan Graham move with a goal.

Hearts began the new half on the front foot before Baverstock set up Graham whose shot curled round the post. Any doubts about the final outcome were dispelled by two goals inside five minutes. Exactly on the hour, Daryl Falconer tucked away Payne’s flat pass from the right. With Rangers’ defensive efforts taking their toll, the double act was soon repeated. This time, Payne passed from the other side but the outcome was the same.

Fletcher bravely went down to rob the ball from Payne’s feet and slapped it away to stop a Falconer hat trick but it floated free for Payne to net with the softest of headers.

Tweedmouth’s consolation came from a late spot kick. Tony Couper upended Khasim Mdlasini as he burst into the box. Already on a caution, Couper was now off. Drew Cummings gave 75th minute replacement keeper Craig Doctor no chance of saving the penalty. Rangers almost grabbed another goal before the end but Mdlasini couldn’t jump high enough to connect with Josh Whitson’s cross. 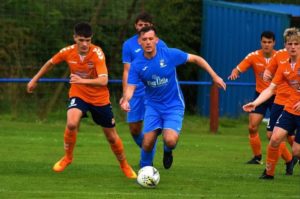 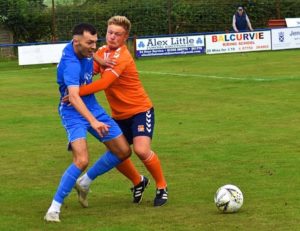 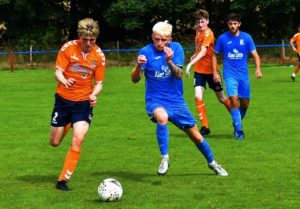 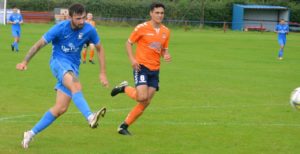 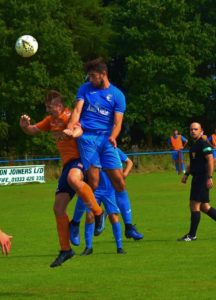 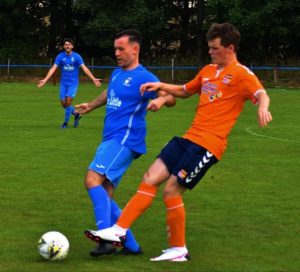