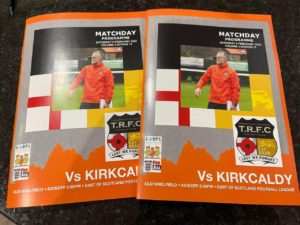 Tweedmouth Rangers played on Old Shielfield for the first time since November 20th but it was not quite the happy return for which they were hoping. Kirkcaldy and Dysart made it eight league wins in a row to move up into third place in the East of Scotland Conference ‘A’.

Adam Mutch was in goal for Tweedmouth on a windy afternoon after Mark Walters failed a late fitness test. Playing with the wind, Rangers got in the first decent shot but Regan Graham’s 18th minute effort was deflected straight into the arms of keeper Robert Wilson. The hosts had to wait just three more minutes to go in front. Michael Robinson was fouled. In similar fashion to his goal at Newtongrange in midweek, Drew Cummings struck the free kick perfectly though this time into the other side of the net.

The Fifers equalised close to half time, the referee ruling a foul was committed inside the box as players battled for possession following a free kick from the left. Mutch, who earlier held a curling shot from Mark Wilkie which could have done anything given the weather, also read the penalty correctly by getting a hand to the ball but the force of Ryan McEwan’s kick ensured it went in.

Unmarked, a mere couple of yards out, Jay Bridgeford got in a tangle with the ball when it rolled his way from the right and the chance was lost. Much the same happened with Robinson in the second half on the end of Evan Smith’s through ball. At that point, Rangers were already trailing 3-1, their cause not helped by fine line offside decisions against both Robinson and Graham before and after the visitors went ahead.

Bridgeford made up for his earlier miss with K&D’s second goal on 61 minutes. Ryan McGowan hit the third with just over fifteen minutes remaining after Tweedmouth twice blocked the ball, the first time from one of the numerous free kicks in a game the physical aspect of which was probably exacerbated by the conditions.

Late on, Cummings had the ball in the net again after Andy Wilson’s attempt was also blocked but in this instance, the offside verdict was more clear cut.