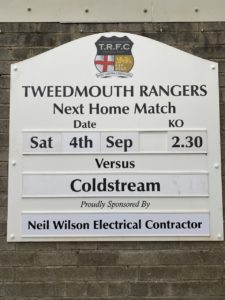 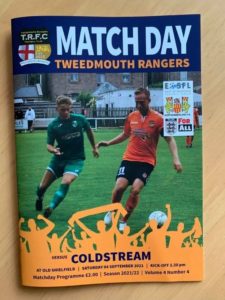 A generally satisfactory afternoon for Coldstream, the main blot on their account the sending off of Jonny Simpson near the mid point of the second half. For Tweedmouth, frustration at their inability to score and two horrible moments for their defence which saw Coldstream looking comfortable at the halfway stage.

In the opening sequence, a series of free kicks went the home side’s way but their most promising opportunity came in open play. Craig Heath and Michael Robinson combined to create the chance for Regan Graham but Ross Straughan blocked his shot before it could trouble Darren McBay.

It was 14 minutes before Coldstream first struck for goal. Bailey Paterson was off target but his team was soon ahead. Home defenders were left floundering as the visitors mounted a quick attack up the left, Craig Heugh taking the final pass to beat the helpless Danny Fletcher.

McBay’s foot stopped Craig Bell scoring an instant equaliser. He then palmed Miguel Freire’s cross away from the danger zone.

Fletcher twice used his fists to deny Shane Bonnington and later Gary Windram but was beaten again on the approach of the half hour. Simpson had already rocked the crossbar with a twister from 25 yards but now found success with the home defence again in a right mess after Ben Wright initially hit the post.

Simpson though was soon in the bad books collecting a caution for a scything tackle on Heath. Rangers’ centre back quickly gave up the struggle to continue and was replaced by Niall Richards.

Tweedmouth’s two best chances of the game both came at the beginning of the second half. Robinson took Jay Baverstock’s pass in an excellent position but, with only McBay in front of him, floated the ball over the bar. Robinson turned supplier but Wright stepped in to kick away a ball which Bell was expected to knock past the keeper.

In the first half, Freire had tried to milk a penalty with a dive. Bonnington now attempted something similar. Neither action was remotely near even Olympic bronze medal standard but whereas the ref ignored Freire’s action, the Coldstream man was booked!

It was a more serious matter for Simpson when Rhys Dixon hit the ground. His second yellow left Coldstream a man short forcing them to defend more deeply but at the same time presenting too much of a brick wall for the hosts to pierce. Josh Whitson did send one cross over the top which McBay fumbled but recovered fast enough to prevent Graham getting a sniff. Fletcher made the last true save of the game when he finger tipped Kieran Lee’s belter over his bar.

Still, there was never a dull moment in this derby. Tempers flared and therefore bookings for Streamers’ Tommy Malcolm and Tweedmouth’s Drew Cummings. Minutes later, Kieran Bullen and Michael Robinson faced up to each other but got away with a short lecture from Mr Hanlon.