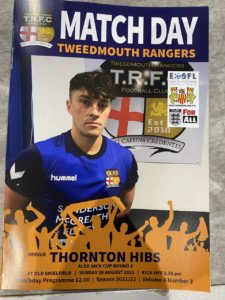 The Bangles sang about ‘Manic Monday’. This was ‘Manic Sunday’! Tweedmouth trailed 1-4 with nine of the 90 minutes left. Yet, the teams were destined to continue playing this Alex Jack Cup Second Round tie for an extra 30 minutes.

The game featured a hat trick for Thornton’s Garry Thomson (Jr.), the dismissal of teammate Matthew Robertson and a forced change of goalkeeper by the visitors. Tweedmouth’s change of keeper occurred before kick off. Due to the late unavailability of Mark Walters, Adam Mutch switched from outfield to take over between the posts. After Rangers lost Rhys Dixon to injury, Jack Cummings, not yet 15, made his debut during extra time.

Whilst Tweedmouth could lament the loss of a couple of particularly soft goals, Hibs’ worry would be their vulnerability to crosses from the right. Plus, in addition to the eleven goals scored, a multitude of other chances were missed by each side.

It was tit for tat early on. Thornton keeper Jordan Millar palmed Regan Graham’s free kick for a corner whilst, at the other end, Joao Vieira cleared Thomson’s diving header off the line. Craig Colquhoun was given space to try from 25 yards but the ball flew over Millar’s bar. Mutch’s last ditch dive stopped Darren Ormiston scoring by the post after Ben Rolland made progress despite three markers trying to close him down.

It was ‘hero to zero’ for Mutch 60 seconds later. He kicked the air rather than the ball as he attempted to distribute it from in front of goal, in the process providing Thomson with a 20th minute gift opener.

Graham made ground before finishing off a cheeky 1:2 wih Michael Robinson by shooting straight at Millar. The visitors wasted an even better chance. After Mutch parried from Liam McWatt, Rolland was odds on to double the lead but wasn’t sharp enough and Dixon managed to clear the danger.

Rangers levelled in the 37th minute. Drew Cummings’ half volley from the edge of the area beat Millar hands down after Colquhoun made the hard yards. Thornton were back in front before half time, Ormiston chesting the ball into the net following Jamie McNeish’s corner.

They stretched their lead twelve minutes into the second half. Vieira couldn’t keep control of the ball giving Rolland the opportunity to advance before, with the decisiveness missing earlier, unleashing an unstoppable shot into the far top corner of the goal.

Robinson was involved in another smart interchange of passes with Jay Baverstock whose attempted lob over the goalie was deflected for a corner. Inside a minute, the hosts were out of luck again when a flapping Millar could only punch Colquhoun’s cross on to the bar. He was in further trouble, fumbling his way to safety when under pressure from Graham as both contested Baverstock’s through ball.

It looked all over for the Berwickers when ineffective tackling led to Fergus Mackie hitting an empty net on 78 minutes. Neil Oliver’s boys then began the unlikeliest of fightbacks. Jack Forster popped up in the goal area to convert another Colquhoun cross with a spectacular overhead kick. Next, Robertson handled Andy Wilson’s goal bound header and was sent off for his troubles. Cummings sent Millar the wrong way with the spot kick. Wilson was not to be denied a goal, getting the last touch to Cummings’ free kick to claim Tweedmouth’s second equaliser. At this point, with barely a minute remaining of normal time, the injured Millar was helped from the field and replaced by Callum Doran.

Hibs went back in front early in extra time. Rolland went on the rampage tormenting defenders. Mutch’s good save presented Mackie with a second chance but he hit the bar. The ball came back out to Thomson whose scorcher from 35 yards vied with Forster’s for goal of the match.

Delaying a substitution in the hope that the sidelined Dixon might be able to return, Tweedmouth were also down to ten men when Thomson made it 6-4 as the first spell of extra time drew to a close.

Rangers started the final 15 minutes on the offensive. Doran held Wilson’s well struck curler and Graham floated the ball over the bar. Mutch’s hands then prevented another Mackie score after McNeish broke down the right. Instead, it was Tweedmouth who netted again. Graham swung the ball into the box after Drew Cummings’ very short right corner kick. Ciaran Hatsell’s head ensured it reached the target, his first ever goal for the club. Alas for those in orange shirts, the final whistle brought to an end hopes of taking the tie to penalties. 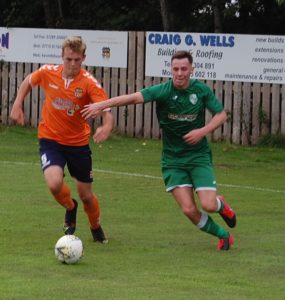 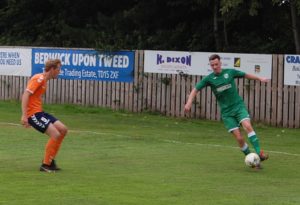 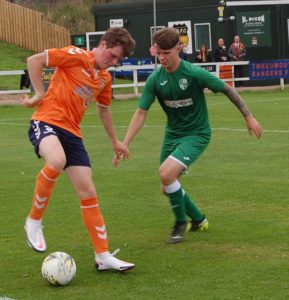 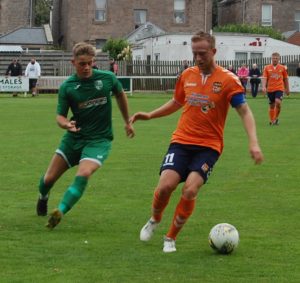 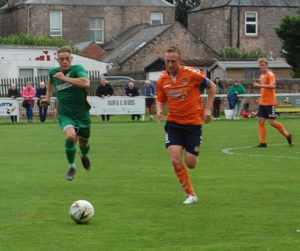 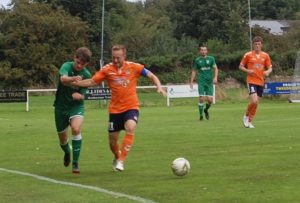 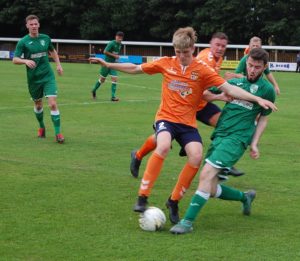 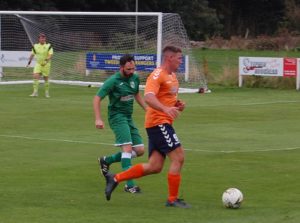 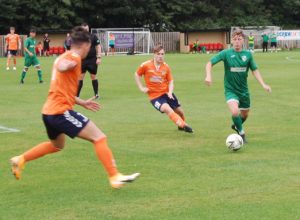 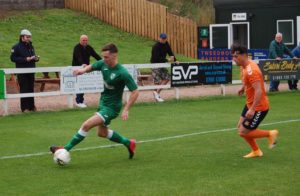