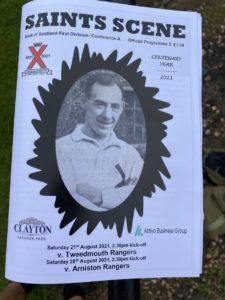 Early sparring included a cross from Saints’ Matthew Irvine which flashed across Mark Walters’ goal and an ultra elaborate bout of Rangers’ passing which finally ground to a halt in the middle of the home half.

It took until the 21st minute for the first corner to arrive. It went Tweedmouth’s way and led to goalkeeper Kyle Moran holding Drew Cummings’ shot at the second attempt. Nik Rendall got in the way when Jamie Heath tried a volley. Rangers’ no. 9 went on to pave the way for what could have been the first goal but Jay Baverstock tapped the ball past Moran’s post.

There was misfortune at the other end, too. Kieran Lindsay struck the bar and Kyle Sneddon glanced a header wide.

Past the half hour, the visitors again looked a good bet to score. Jack Forster sent Jamie Heath through but he lost his footing, the ball skewing off his boot in the wrong direction. He soon made up for it beating Moran in the 36th minute following an error by a St Andrews trialist.

The meteorologists were correct in predicting a soggy afternoon in this corner of Fife. The heavy rain began a little before the interval and continued beyond the end of the match. It didn’t stop Tweedmouth opening the second period with good inter passing which ended with Baverstock hitting the post. St Andrews moved quickly downfield after Moran knocked away a Regan Graham corner but Rhys Dixon was equal to the task in a one on one with Sneddon by preventing him from getting in a decent shot.

The home team suffered a 51st minute blow when Matthew Hutchison pulled up with apparent hamstring trouble. Paradoxically, his departure led to a positive development in United’s play. Ross Cunningham began to drift from his delegated centre role to his more natural station on the left from where he emulated the threat Hutchison had presented on the right during the opening 45 minutes. The latter’s replacement Kai Pannwitz also pepped up Saints’ attack though their 57th minute equaliser came simply from the ball hitting Baverstock’s hand. Walters made the wrong guess as to which way Fraser Anderson would send the penalty kick.

Tweedmouth went on to endure an uncomfortable spell. Lindsay just failed to connect with a blistering Cunningham cross and then, having cut back into the centre, Cunningham ignored two men in good supporting positions to his left and opted to go for goal himself, unsuccessfully.

It was end to end stuff as the game entered its final quarter but, as the minutes ticked away, Tweedmouth began to get on top again winning plaudits from spectators for continuing to try to play good football. Defenders became attackers. Moran could only punch out Dixon’s strike as far as Evan Smith whose return lob was too high despite a meticulous effort to fine tune it for a goal.

A long ball to Michael Robinson and a short pass from him to Craig Bell saw another missed chance but the final one was taken. Graham took a hold of the situation to send Robinson on his way past the exposed Moran to make it 2-1. St Andrews went through the motions of kicking off again but there was no more time on the clock.