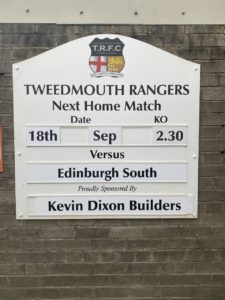 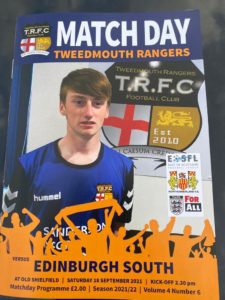 Tweedmouth’s first home win of the season took them through to the second round of the King Cup, a competition now exclusively for clubs in the East of Scotland League First Division Conferences.

Looking assured in their passing game, Rangers enjoyed the lion’s share of first half possession meaning the visitors were often chasing the ball. In a game of limited chances, Craig Colquhoun drifted into the penalty area as Regan Graham prepared to take a 33rd minute free kick for handball but, when the ball eventually came Colquhoun’s way, a South defender made the right move to send it off course. Seven minutes later, a rare Edinburgh shot was comfortably held by Mark Walters whilst Connor Brian, back in Tweedmouth’s ranks, was off target with an ambitious long range attempt on taking a short pass from Jack Forster.

Rangers went in front shortly after half time. The ball bounced perfectly for Michael Robinson when Walters gave it a thumping downfield kick from hand. Graeme Lennie was well off his line and despite being man in the middle between two red shirts and outside the box, Robinson was able to lob the ball over the keeper into the bottom left corner of the goal.

Less than ten minutes later, the hosts nearly scored again. Colquhoun, a constant threat on the right, controlled a long pass and cut inside to supply Declan Knox. He turned to face goal to fire, only a slight deflection stopping the ball going inside rather than skimming its outside for a corner.

Four different players were involved in the build up when Tweedmouth doubled the margin past the 80 minute mark. After accepting the final pass from Forster, Craig Bell dribbled the ball a few yards into the penalty area and, ignoring the presence of a nearby defender, directed it with his left foot into much the same spot as Robinson.

Edinburgh South had been more adventurous after the break than in the preceding 45 minutes but Rangers defended well. The away team needed the help of a set piece from which to score in stoppage time. From a free kick inside the centre circle, the ball came off a home head the wrong way. William Scott won the ensuing three man jump appearing to shoulder rather than head the ball into the net.

This victory over Conference ‘B’ opposition ensures that Tweedmouth, who currently operate in Conference ‘A’, visit Conference ‘X’ (!) League newcomers Bo’ness Athletic in the next round.