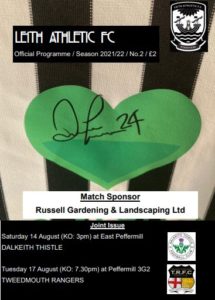 The final score suggests a comfortable victory for the East of Scotland ‘A’ Conference leaders but it was anything but a comfortable night for the Edinburgh team. After scoring an early goal, Leith found themselves on the back foot for the rest of the first half as Tweedmouth’s youngsters sprayed the ball about in style, denied an equaliser by the post, the goalkeeper and offside decisions.

Leith finished the second half with just nine men and there was further drama in an incident-packed match as coach Jamie Paterson was also ‘sent off ‘ — compelled to leave the technical area — for provoking the ire of the referee.

Rangers’ early movement suggested they were up for the challenge but their defence failed its first test when Martin Maughan put Athletic ahead after only three minutes.

Two speedy Tweedmouth counter attacks broke down with the final pass before keeper Kyle Rankin’s foot beat Craig Colquhoun to the ball as he homed in on it.

Rankin was tested by Craig Bell following Adam Mutch’s surge up the left and then made a one-handed save, turning Regan Graham’s shot round the post after another impressive build up featuring Colquhoun and Drew Cummings. Graham hit the post shortly afterwards.

In promising situations both Jack Forster and Bell were caught out by offside decisions. Forster had blocked a shot in front of his own goal to remind his team of the potential prowess of the home attack. They responded by pulling back every player bar Bell inside their own half as and when necessary. Hence Brodie MacKenzie’s unsuccessful high shot from distance.

The second half was Tweedmouth keeper Danny Fletcher’s turn to shine beginning with his holding of a powerful hit from Murray Hand. Next, he saved with his foot after a Leith free kick was headed away and then foiled Kayne Paterson to whom Rangers had gifted the ball. But in the 58th minute, despite stopping a first shot, he was out of luck. As Robbie Walker tried again, the ball spun away from Fletcher’s hands into the net having taken the slightest of deflections.

Eleven minutes later, Maughan released the trigger with a neat turn. Fletcher dived to push the ball away for a corner which was delayed whilst the ref sent off Paterson for kicking out at him.

Miguel Freire sent over a couple of decent crosses towards Michael Robinson but they did not produce results. Michael Shaw’s difficulties in dealing with Freire’s footwork led to a second yellow and the 81st minute departure of a further Leith player.

The hosts immediately brought on two pairs of fresh legs, substitutions ultimately vindicated by the perverse ending to the match. With Tweedmouth going all out to try and take advantage of their numerical supremacy, they fell foul to long balls and the pace of Maughan who bagged two more goals. The first was just before his coach’s red card. Arguably, he started his run for the second, right at the death, from an offside position.

In between, Robinson was involved in an altercation with former Berwick Rangers’ man Craig Hume. After the gathering crowd of players was dispersed, both picked up yellow cards.