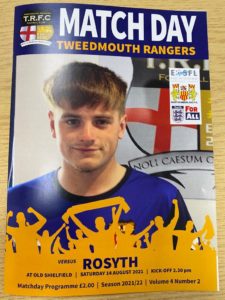 Tweedmouth’s second home game of the season began in bright sunshine but there was also a noticeable breeze at Old Shielfield. Rosyth dictated play in the early minutes before being helped by a 7th minute penalty. Both Drew Cummings and Rhys Dixon were in close proximity to the man with the ball and if Tweedmouth questioned whether an offence was committed, they were convinced that whatever had occurred had been outside the penalty area. Nevertheless, Thomas Hampson made the most of the situation, firing the ball into the top corner of Mark Walters’ goal.

For the bulk of the remainder of the half, Rangers played the more constructive football. Rosyth’s keeper was on alert as he witnessed a series of well distributed balls from Josh Whitson to various areas of the visitors’ half. After recovering from a hefty tackle, on 31 minutes, Regan Graham shot wide from outside the area to end a build up involving Cummings, Dixon, Whitson and home man of the match Craig Colquhoun.

The home defence continued to play with confidence as Rosyth came back into the picture before their own back men survived when Colquhoun lobbed the ball into the penalty area with two Rangers running towards it. Graham then left two men standing as he shot through a gap to pass to middle man Craig Bell, Michael Robinson, with his first strike since coming on four minutes earlier disappointed to see his effort travel left of the post.

Four minutes into the second period, Colquhoun was given space to try a long shot but it finished over the bar. However, the Fife team began to look more comfortable playing downhill and hit the post on 59 minutes. A long free kick was then headed straight into Walters’ arms. More dangerous was a back heeled kick off a corner ball which he punched over his bar.

Nine minutes from time, another corner led to Rosyth’s second goal. Liam Queen’s glancing header beat the defence at the near post. Despite his area being packed with teammates, Walters was kept busy, punching away one shot, palming another to safety and then flying off his line to get his fist to yet another.

Upfield, Colquhoun played the ball to Graham inside the Rosyth penalty area but he was again off target and Tweedmouth’s last chance of a goal was gone.