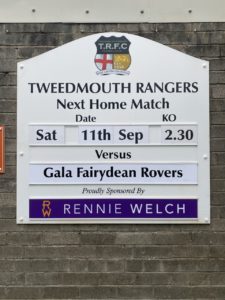 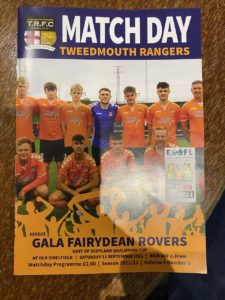 This was always going to be a tough one for Tweedmouth. With five goals in each half, the Lowland League club eased its way into the third round of the East of Scotland Qualifying Cup. Over the 90 minutes, Tweedmouth carved out a handful of scoring chances but could not manage the consolation goal they merited.

The first of those chances came when they were just a goal down. Craig Bell used head and foot to keep the ball away from the grasp of Gala goalie Mason McCready but was left to try a lob from a tight angle and it went too high.

A minute from half time, Jay Baverstock hit the post following excellent footwork from Craig Colquhoun and Michael Robinson. As Baverstock attempted to follow through, McCready dropped on the ball right on the line.

Early in the second half, Regan Graham dinked the ball over a Fairydean head to Robinson. At full stretch, he struck a great volley only for McCready to show equal agility with a fine save.

With around ten minutes remaining, Colquhoun stole the ball from Touray and passed on to Robinson. This time, the keeper’s foot got in the way of his close range shot. Moments later, McCready also saved from sub Sean Campbell.

A lot of Rangers’ first half problems arose on their right side. Gala opened their account after 5 minutes when Ciaran Hatsell, drafted in at centre back for the injured Craig Heath, misjudged a cross leaving Marc Berry to fire from left to right into Mark Walters’ net.

Berry got the better of Hatsell to set up Daryl Healy for the first of five goals in the 13th minute. Sixty seconds later, the former Berwick Rangers man struck again. Martin Scott got the first of a brace when he curled the ball goalbound—again from the left and, on 25 minutes, Healy banged in his third goal.

At this point, Rangers’ manager Neil Oliver reshuffled his right side, taking off wing back Miguel Freire. Hatsell moved forward. Joao Vieira joined the defence and soon blocked a Healy volley just inside the penalty area.

It took nearly another half hour’s play before Gala scored again in part due to three super Walters’ saves in rapid succession. Ciaren Chalmers finally got their sixth helped by Evan Smith slipping to the ground as he was about to challenge him. The next one was also Chalmers’ from a glancing header off Scott’s corner kick. Scott bagged the next one himself before sending the ball over the upright, the climax to a run in which he broke out of a number of tackles serving to highlight the visiting players’ greater physique and experience.

It was left to Healy to round off matters. The home boys had only themselves to blame for his 75th minute goal, their defence needlessly playing itself into trouble. From Scott’s pass, he flicked in the final goal with 13 minutes still to play.