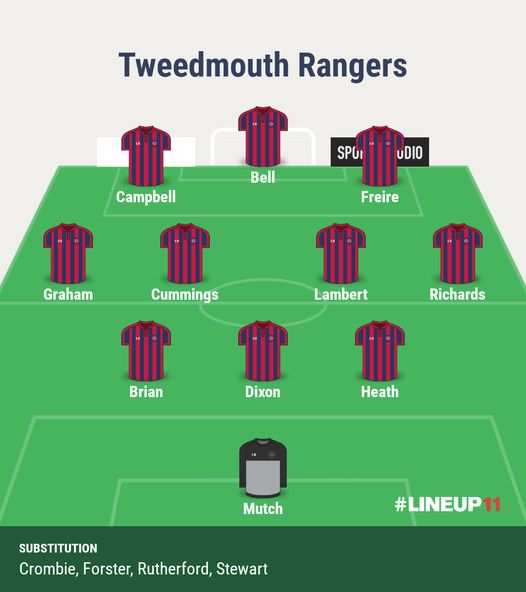 Tweedmouth began their East of Scotland League programme against a Craigroyston side unrecognisable from the one they beat 4-0 on the same St. Mark’s Park pitch back in January. Tweedmouth also included five newcomers of whom Drew Cummings was the most impressive on the day.
Both teams made tentative starts, the respective goalkeepers untroubled by tame or inaccurate shooting.
In the 18th minute, Rangers’ close marking proved insufficient as by dint of a couple of quick, short passes, the ball was played forward to Rees Smith who slipped it beyond Adam Mutch for the opener. Five minutes later, Smith scored again, this time from the penalty spot following Connor Brian’s trip on Ryan Currie.
Craigroyston were now in control though the visitors might have pulled one back had Craig Bell been able to reach Regan Graham’s cross after good work by Cummings and Miguel Freire on the left.
Smith may have claimed the third goal and thus a hat trick but it was actually the toe of under pressure defender Connor Brian which poked the ball past Mutch. Smith was again involved as his 42nd minute corner evaded everyone else allowing Ross Nisbet to chest the ball over the line by the far post to make it 4-0 at the break.
Manager Neil Oliver’s half time talk led to an improved performance from his charges in the second half though it began with Mutch forced into a save from Smith after a teammate gave away possession.
The ball was left for Ryan Robertson to claim the fifth goal on 51 minutes. There then followed a long spell in which the Berwick team enjoyed parity of possession with the hosts. Cummings strived to engineer something from midfield but his team could make little headway up front posing little threat to Jamie Newman in the home goal.
Mutch again saved from Smith whilst sub Gavin Pettigrew was just wide when, not for the first time, Craigie correctly read and intercepted a Tweedmouth pass. Another replacement, Bradley Anderson, crossed for Louis Swanson to stoop and head in the final goal eight minutes from the end. Given that Anderson stormed down the right flank before making his delivery, it seemed apt that seconds later, a two minute torrential downpour should commence.