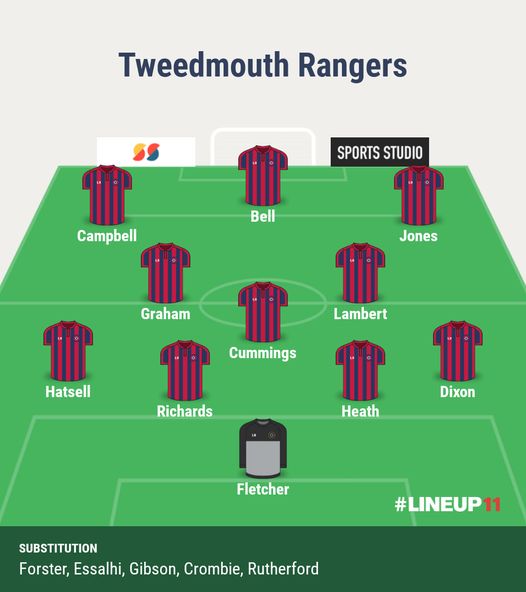 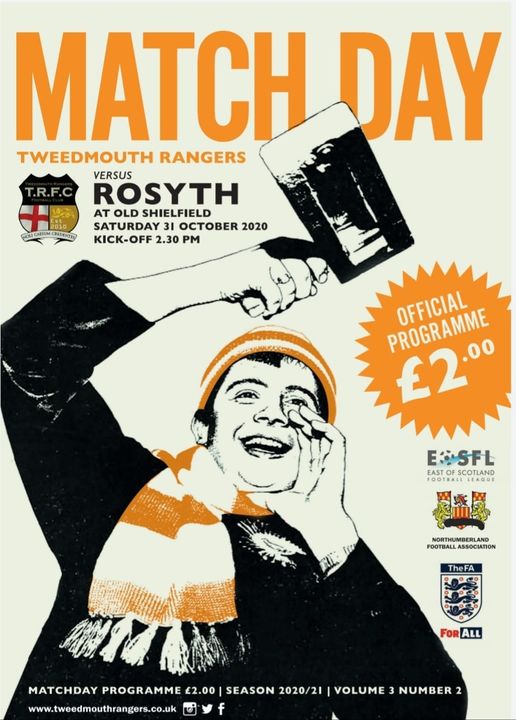 With a strong westerly wind blowing down Old Shielfield, the referee gave consideration to calling off this game even before it started. It was given the go ahead but, crucially, the wind never abated. As a result, there was always the fear that the home side’s two goal interval lead might not be enough to see them through to their first victory of the season.
The first goal came inside the opening minute. In his first appearance of the season, Ciaran Hatsell supplied Craig Bell with the ball to beat Cammie Lambie. The wind carried Bell’s next shot, from 25 yards, into the keeper’s arms.
Sean Johnstone gave Rangers their first fright with a dangerous cross from the left in the 18th minute. Shortly afterwards, Hatsell also had a hand in Tweedmouth’s second goal, playing the ball on to Sean Campbell to cross from near the touchline. Defender Craig Anderson failed to deal with it and Bell pounced again.
Unsurprisingly, Rosyth found it tough going against the wind. Their best chance fell to Gregg Page, Craig Heath blocking his shot before it could worry Danny Fletcher in the home goal.
The Fifers put Tweedmouth under pressure from the moment the second 45 began, Hatsell winning the race for the ball and booting it into touch as Liam Queen looked to make it his. As at Dalkeith the week before, Rangers’ susceptibility to corners proved part of their undoing. With 53 minutes played, Ryan McDonald cut their lead when gifted a free header at the back post.
Supporting right full back Jack Henderson twice passed up promising opportunities to equalise. It fell to Mikey McMillan to make it 2-all by turning to hit the ball high into the net following a throw in.
Another corner from the right led to Tweedmouth falling behind with 15 minutes to go though there was a suspicion that the ball had been knocked back into play enabling Iain Griffin to land what turned out to be the winner.
Marco Lambert’s lofted pass to sub Yassine Essalhi gave the hosts a rare spell inside their opponents’ half. The ball had already gone when Essalhi crash landed after being caught by the foot of Blair Clark who looked bemused when the ref showed him a straight red. Rosyth, of course, still had sufficient bodies to form a formidable wall which blocked Drew Cummings’ free kick from just beyond the penalty area.
The visitors could have scored again as the game drew to a close. Michael Cameron couldn’t get the necessary touch to the ball when Fletcher fumbled it, the keeper reacting quickly to prevent Page, following through, from succeeding instead. He was also quick out of goal to foil the same player once more before the finish.