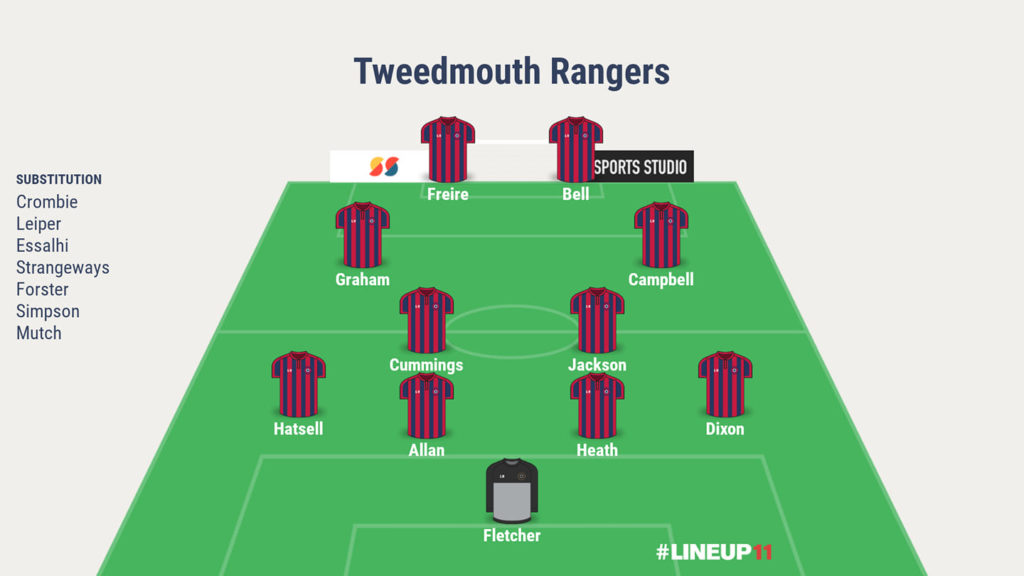 The name may be easy to remember but it’s one Tweedmouth might wish to forget. Zok, forename Chris, helped himself to five goals at Old Shielfield leaving Rangers still searching for that elusive first League point of the season.
Early proceedings gave no hint of what was to come. The hosts passed the ball about confidently and, twice, Dunipace keeper David Kane was compelled to charge out of his area as Craig Bell homed in on long balls from Ben Jackson and Sean Campbell respectively.
There was an element of luck about the visitors’ 17th minute opener. In attempting to clear Martin France’s shot, Rhys Dixon sliced the ball into his own net. The second goal, just a minute later, was down to shoddy defending. This time, France was the delivery man with Zok given a simple, free header by the back post.
Alan McFadden chipped the ball beyond keeper Danny Fletcher for the third goal and, with the home defence all at sea, Zok drilled in the fourth to round off a nightmare six minutes for the Berwick team.
About the half hour, Ross Allan, in the process of winning the ball, was judged to have fouled Zok, the no. 9 duly taking the opportunity to complete his hat rick from the penalty spot.
Tweedmouth had already shown they were capable of setting up promising situations and one finally yielded a result. Captain, Regan Graham finished off after the ball was swiftly spread across field from right to left.
Dunipace didn’t score again in the first half thanks to Fletcher’s flying fingertip save from McFadden and Dixon chesting a corner ball off the line. However, any hopes of a second period home revival were soon dashed beginning with Zok’s fourth goal two minutes after the restart. Paying scant attention to watching defenders, France then completed a solo run in style to make it 7-1.
McFadden had the ball in the net again but was ruled offside. Going the other way, Bell, Miguel Freire and Graham combined but the latter’s shot was blocked as was Campbell’s follow up. Freire had no joy either after supplied by Tweedmouth’s best on the day, Drew Cummings.
Before being substituted, Zok signed off by going nap through converting a cross from Liam Craig.
During the scoreless final half hour, Tweedmouth’s struggle to turn chances into goals was highlighted by Jackson being wide with a strong header off Campbell’s corner kick and Freire unable to get a foot to it as he ran in to meet Luke Strangeways’ ball into the box.
Pictures :
None