TRFC Man of the Match : TBC 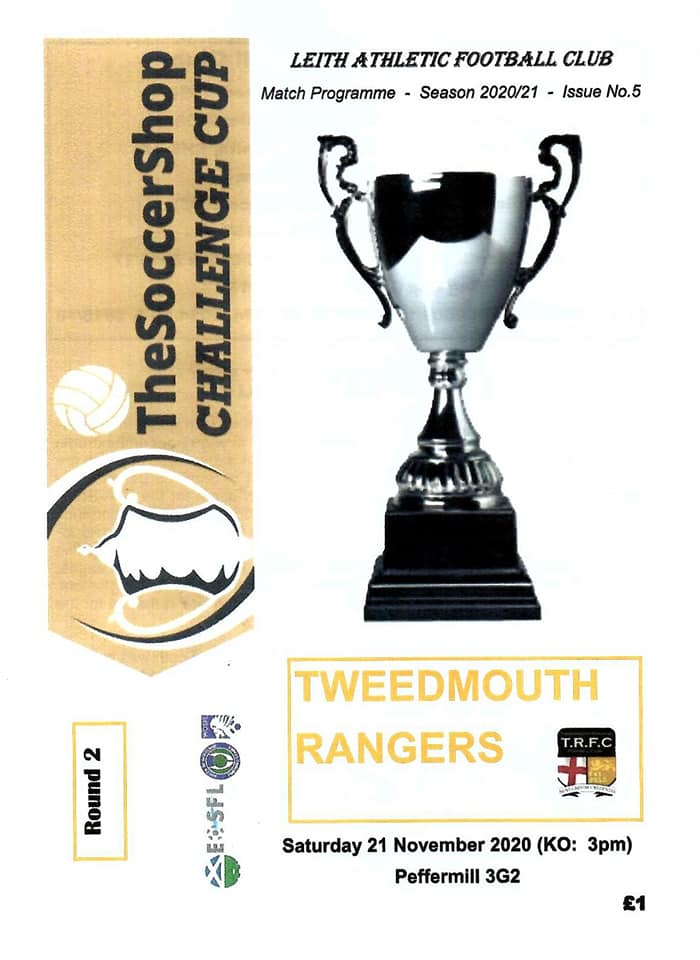 After a first round bye, Tweedmouth exited the Soccer Shop sponsored South Region Challenge Cup at the hands of fellow East of Scotland ‘A’ Conference members Leith Athletic.
The lights were on from the start at Peffermill for a game which produced an above average number of offside decisions.
There was little between the teams in the opening quarter of an hour. Shots from Leith’s James Redpath and Rangers’ Luke Strangeways were blocked either side of Yassine Essalhi firing straight at keeper Campbell McLellan from 30 yards after the Edinburgh team gave away possession.
In the 17th minute, Martin Maughan tucked the ball into the bottom corner of the net, the referee emphatic he had run on from an onside position to meet it when it was chipped over the defence.
Minutes later, with Regan Graham and Craig Bell seemingly well placed inside the penalty box, Ciaran Hatsell pumped the leather their way only for the match official to signal for offside thus ending the chance of a quick Tweedmouth reply.
Brodie MacKenzie’s reward for some dazzling footwork was Leith’s second goal after 37 minutes. Before the interval, the visitors suffered another blow with the loss of Ross Allan who, in his first match since rejoining the club, was injured as he successfully prevented Maughan from creating anything out of his run towards the bye line. Hatsell moved inside to centre back with Jordan Crombie coming on to take over at left back.
The second period opened with Craig Heath beating MacKenzie to the first of numerous long punts from Leith in the knowledge that the ball would travel particularly fast on the 3G surface now that they had the wind behind them. The long ball paid dividends when Maughan bagged his second goal seconds after McLellan knocked away a deflected Regan Graham hit.
With substitutes giving Tweedmouth fresh impetus, from then on, the game reverted to one of equal footing. Grant Leiper was the middle man in a play which led to Miguel Freire sending the ball just outside the post, the same destination for Sean Campbell’s free kick after he was fouled near the ‘D’. At the away end there were no takers for Redpath’s long, low ball into the area. Standing by the far post, skipper Craig Hume headed in another ball from the same left side but, again, the verdict was ‘offside’.
Graham instigated the move which featured a smart exchange of passes between Campbell and Freire, the crossbar denying the former the goal which Tweedmouth’s play merited.
Pictures :
None