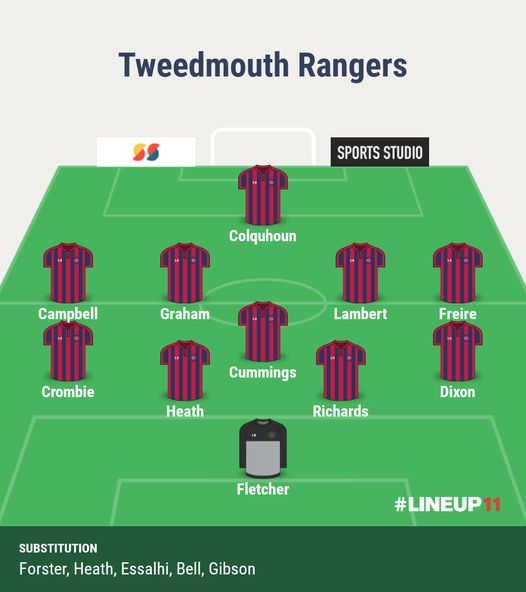 If a casual spectator had been permitted to enter the ground during the second period, they might have been surprised to learn that Tweedmouth were trailing 4-0. By half time, the visitors appeared down and out especially after conceding twice inside a minute just before the interval. Yet, in the second half, Thistle often looked uncomfortable as a revived Rangers took the game to them.
Bad luck played a part in their not scoring more goals. No more so than in the 55th minute. Craig Bell accepted a poor home pass to set Regan Graham free only for his well timed shot to bounce back off the post into the arms of grounded keeper Shea Dowie.
Dalkeith’s first corner of the afternoon almost produced a headed own goal. No other player got a touch to the next one, Ronan Clelland’s inswinger going straight into the net for a 13th minute lead. Tweedmouth had an immediate chance to equalise but, with Craig Colquhoun unmarked to his left, Sean Campbell opted to shoot but well over the bar.
Craig Heath collected the first yellow card of the day for pulling down Danny McFadden. It proved to be a double punishment for the Berwick team as Clelland directed the free kick into the back of the net.
From another corner, Dan Greig was wide with a free header and, from the same spot as before, Clelland was too high with another free kick. However, Tweedmouth’s struggles at set pieces were again illustrated two minutes from the break when Greig headed in another ball delivered from by the flag. Sixty seconds later, McFadden was dropped inside the box and Clelland completed his hat trick from the spot.
After Clelland’s initial second half effort flew over the bar, helped by the post interval introduction of the livewire Bell and with their back four now positioning further upfield, Tweedmouth stepped up a gear. Closed down by defenders, both Bell and Colquhoun made attempts on goal from awkward angles. Also awkward—for Dowie— was Drew Cummings’ spiralling pitch edge free kick which the keeper could only fist even further skyward. Next, he was forced to rush out to thwart Bell after Graham repaid him for his earlier assistance.
Campbell couldn’t muster sufficient firepower to capitalise on two excellent examples of team play but was on target on 81 minutes with a free kick awarded for handball. Niall Richards then came up to meet a Graham corner but headed it too high.
Thistle restored the four goal difference with a breakaway goal of quality from Michael Bennett to which Rangers’ goalie Danny Fletcher did well to get a hand but couldn’t stop.
Tweedmouth responded with Graham inches over and Jamie Heath’s low drive travelling at pace just outside the post.
The hosts were down to ten men for the final few minutes. Darren Leslie was shown a second yellow and consequently a red card for a wild challenge on Cummings which sent the Tweedmouth midfielder over the touchline.