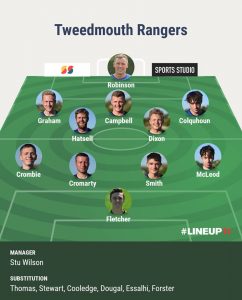 Both goalkeepers were amongst three players shown red cards during this Tweedside derby at Old Shielfield. First to go was the home side’s Danny Fletcher leaving outfield player Jordan Crombie to take over between the posts for three quarters of the match. The Berwickshire team lost William Stewart for a similar offence of ‘denying a goal scoring opportunity’ with Matt Corfield donning the green jersey for the final nine minutes.

Having seen Fletcher make an early save from Stuart Briggs and then Owen Renton dribble past two men inside Fletcher’s area before the ball rolled away from him, Coldstream suddenly found themselves a goal down in the ninth minute, Regan Graham’s volley hitting the net after Tweedmouth broke upfield.

Coldstream levelled with a simple nod from Briggs after Ross Straughan, on the end of Sam Dawson’s long free kick, headed the ball across to him from the far post.

With his defenders caught out by Kieran Lee’s astute long ball, Fletcher was on his own as recipient Renton raced towards goal. He was abruptly stopped by the keeper’s illegal challenge. Renton was fine after treatment but Fletcher took no further part in the game.

Renton went on to set up Briggs for a wild shot. Nearer the other goal, Craig Colquhoun’s low spinner was more troublesome, Stewart doing well to turn it round his post.

Briggs did score again, and in style, on the half hour, getting a second chance after appearing to lose the ball to Rudy McLeod. This lead lasted just four minutes. Sean Campbell, Rhys Dixon ( twice ) and Michael Robinson were involved in the lead up, Campbell now hoodwinking potential tacklers with a quick change of direction to pick his spot with deadly accuracy. Alas for the hosts, Coldstream hit back straight from the kick off with Briggs completing his hat trick.

They made it 4-2 before the break. Renton crossed, Briggs’ attempted back heel flick going into the net off McLeod.

Despite Tweedmouth playing all but four minutes of it a man short, there wasn’t much between the teams in the second half although Briggs extended the margin with a 55th minute penalty awarded when McLeod fouled Lee. It became 6-2 thanks to Josh Neill’s excellent ball out to Tommy Malcolm on the right and his stunning strike into the opposite corner of Crombie’s goal.

Rangers’ chances included one created when Robinson played on Crombie’s long punt to sub Miguel Freire but Stewart got the angle right to successfully block the sub’s shot.
Robinson worked his way between a trio in blue but Yassine Essalhi’s tame finish went wide. When the same player looked certain to score, Stewart was the next man to march for bringing him down. Stand in Corfield saved the consequent free kick from Colquhoun.

Five minutes from time, Kieran Cromarty was dismissed after collecting a second caution, this one for fouling Renton. It presented Briggs, who had already hit the post, with the prospect of going nap from a second penalty but Crombie dived the right way and saved it.

There was still time for a Dawson free kick to shake the bar whilst Tweedmouth wasted a last chance with no one in the right place to cash in on Colquhoun’s perfectly weighted ball into the box.