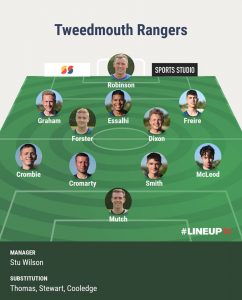 This was Tweedmouth’s second visit to the extremely windy Ballast Bank within the space of three weeks. This time it was for a 2nd Round tie in the Alex Jack Cup, a competition for East of Scotland clubs not involved in the Scottish Cup.

First chances fell to the Swifts. Skipper Callum Strang rushed forwards in an attempt to turn Robert Kinnaird’s off course curler towards Adam Mutch’s goal but only succeeded in giving Tweedmouth a goal kick. Gavin Smith robbed Even Smith but the wind ensured the winger’s cross floated to safety.

Only home keeper Mark Rowbotham’s knee stopped Yassine Essalhi scoring from close range before Mutch had to look sharp to push away Steven Slimmings’ effort from just outside the penalty area.

The Fifers took the lead with Dean Anderson getting the vital touch to a 39th minute corner. Rudy McLeod got in the way of a near certain second goal as Swifts sought to consolidate their just about merited half time lead.

Tweedmouth built up a few decent second half attacks, the most impressive coming around the hour but it ended with the conditions helping to send the ball flying off Michael Robinson’s boot at the unlikeliest of angles. Three minutes later, the home side weren’t required to construct anything so intricate to extend the margin as Strang was given midfield freedom to complete his run with their second goal.

Rowbotham fisted out a Regan Graham free kick before McLeod again got in the way of a goalbound shot from Strang but the tie was put beyond the Berwick side in the 73rd minute. Possession was given away and defenders wrong footed as sub Calum Murray’s weak delivery crept just inside the post.