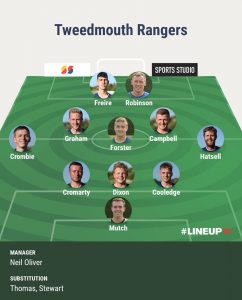 Tweedmouth completed a League double over Hawick on a soft Albert Park pitch but a late goal from home captain Daniel Chandler meant it was a tense final five minutes for the visitors.

Hawick almost took the lead through an own goal after 13 minutes when Kieran Cromarty headed David Strathdee’s long free kick on to his own post. Another free from Strathdee finished just outside the other upright though keeper Adam Mutch had it well covered.

Rangers’ Sean Campbell was awarded a similar kick after he was fouled 30 yards out directly in front of goal. His strike carried more menace but ended the same distance off target.

A couple of Ross Scott shots ended up well away from goal, Hawick’s efforts to capitalise on wind advantage also frustrated by good goalkeeping and bad luck when Scott headed against the bar. They went behind when Campbell set Miguel Freire away on the left. He beat one man but was brought down by the second inside the area. Campbell comfortably slotted home the 37th minute penalty.

Ryan Shepherd’s excellent tackle denied Michael Robinson the chance to go for a second goal from close in after Regan Graham and Freire carved out the opening.

Robinson reciprocated early in the second half by paving the way for Graham to take on goalkeeper Ewan Reilly but, from a tight angle, he lifted the ball over the intersection.

Tweedmouth were struggling to make the most of now having the wind with them and it was somewhat against the run of play that they scored again in the 72nd minute. With referee Paul Hanlon correctly ignoring the offside but non-interfering Lennon Stewart, Robinson was able to continue and again set up Graham who this time made no mistake.

As a revitalised Rangers sought a third goal to put the issue beyond doubt, Reilly saved from both Graham and Campbell whilst their defence coped with what Hawick had to offer until Chandler’s 88th minute header after a corner.

Albert United’s last chance to make it a draw came with a 25 yard free kick in the third minute of added time. It beat the wall but Mutch punched it clear as the final whistle blew.