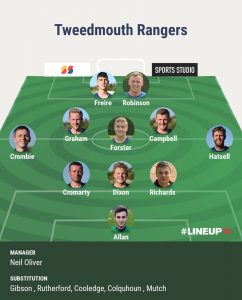 This win took Leith to the top of the East of Scotland First Division ‘A’ Conference but the consensus in both camps was that the margin of victory gave a distorted impression of a game played in tough conditions at Peffermill.

With a howling wind blowing across the 3G pitch it began with three goals inside the first ten minutes. James Redpath opened the scoring when his ball from the left hit the face of Rangers’ Ciaran Hatsell before crossing the line. Keeper Stuart Allan stopped another shot but the ball went straight to Lewis Tracey who put the Edinburgh men two up.

Allan turned away Kyle Mitchell’s chip for a corner before Regan Graham picked up a stray pass from Ben McGinley. The keeper scurried back towards his unmarked goal but his foot only helped Graham score from just beyond the box. Graham was unfortunate not to get another from an acute angle after running into the area to take Jordan Crombie’s pass.

After a 10 minute hailstorm subsided, Mitchell made it 3-1, getting the touch that mattered at the end of an untidy tussle for the ball inside the goal area.

Twice ahead of the break, through passes from Graham and Miguel Freire respectively, Michael Robinson was in situations which might have produced goals but in the first, he was robbed by Lewis Smith and in the other, he shot wide of the post.

Complementing the arrival of sunshine at the start of the second half, Tweedmouth opened brightly but moves honed in training failed to produce results. With Rhys Dixon anchoring their defence nor did Leith make much headway at the other end until a lucky break in the 68th minute. This time, Allan sprayed a pass to the wrong man, Leith’s Dan Garvey, who took full advantage to increase the lead further. Ten minutes later, a quick counter attack led to a first score for Steven Froude.

Jack Forster came closest to scoring a second Tweedmouth goal with a 25 yard volley but the difference in the team’s finishing ability on the day was illustrated within the space of a couple of minutes further on in the match. Ryan Mayer stylishly hit home a cross from the right whilst, after being set up by Robinson’s pass and Jake Rutherford’s header, Sean Campbell’s shot barely troubled McGinley.

Again Leith worked their way up the right flank for Froude to round off the scoring with a few minutes remaining.