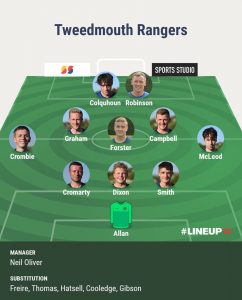 For the sixth time to date this season and the second time versus the Stirling students, Tweedmouth lost by a one goal margin. Whilst they were authors of their own downfall in the way goals were conceded, it was also true that in a second half they near totally dominated, luck was not on their side.

Twice inside the opening 15 minutes, home keeper Colin Sanchez was forced out of his area to clear as Rangers opted to stretch the home rearguard with long balls their own men frantically chased.

Stirling’s play was more methodical but it was Tweedmouth who did the work for them in the 25th minute. Slackness at the back left keeper Stuart Allan without cover and Euan McGill a free shot to make it 1-0. Tweedmouth did get a break two minutes later when McGill missed a sitter following Stuart Frankland’s cross but the lead was soon increased. This time, Finlay Goodlad crossed. The ball could have been headed away. Instead it bounced right for Frankland who outfoxed two defenders ahead of finding the net.

Tweedmouth quickly cut the deficit. Rudy McLeod hared after one of those long balls, hitting the deck head first in a crowded area. Seconds later, the ref awarded a penalty when Sanchez brought down Sean Campbell, who converted it, as they both went for the loose ball. Meanwhile, after a sideline assessment, McLeod was able to resume playing.

A change of tactics helped Tweedmouth control the second half, the Uni rarely posing a threat after Ross MacLaren was wide with an early header. Yet, despite Jack Forster’s intelligent distribution, the Berwickers could not turn pressure into goals. Midway though the period, a trio of corners culminated in Campbell shooting past the post. Regan Graham picked up a poor Sanchez kick and from 40 yards came close after sensibly attempting to cash in on the keeper being way out of goal.

Sanchez slapped down Kyle Cooledge’s effort from inside the box before Forster and Craig Colquhoun conspired to draw him out of position once more and give Graham an even better chance. Frustratingly, his strike trickled off course after it caught the heel of team mate Miguel Freire. Finally, Freire’s footwork flummoxed Goodlad but Michael Robinson could only chest his pass over the dead ball line.

None, photographer not present.