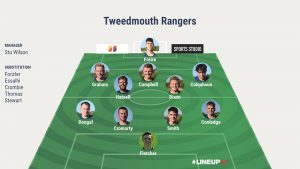 A goalless first half at Kings Park belied the fact that this was a highly entertaining game, not the only reason that both sides were happy enough with a draw. For Tweedmouth, the performance and point provided further encouragement after their last minute defeat to Edinburgh United the previous Saturday. Dalkeith’s satisfaction came from scoring the final goal after they went 2-1 down late on.

The visitors threatened with a couple of very early headers and racked up a quartet of corners inside the first eight minutes. Sean Campbell got in the first serious shot nine minutes later, Jamie Newman getting down to save comfortably. Likewise his opposite number Danny Fletcher when attack minded full back Michael Deland made ground and had a crack.

Thistle opened the scoring 10 minutes into the new half. Deland went on another run before cutting inside to shoot. The ball hit legs for a corner, Jack Burrows scoring with the second home header after the ball came over from the flag.

Deland caused problems again when he dribbled past three in blue to set up Bennett who hit the inside of the post. The ball seemed certain to cross the line until Kieran Cromarty, at full stretch, kicked it away. Cromarty began the move which resulted in Tweedmouth drawing level with 75 minutes played. Newman was well beaten by Campbell’s fierce strike after link man Yassine Essalhi saw he was unmarked.

In contrast, five minutes later when Craig Colquhoun chanced his luck, Dalkeith’s keeper appeared to have the ball safely covered but it carried sufficient pace that he let it slip through his hands into the net; the goal a fitting reward for a player whom Dalkeith found a handful all night with his ability to hold on to the ball under pressure.

Four minutes from the end, Fletcher rose high inside a crowded goal area to punch away a long free kick but the ball landed favourably for James McPartlin to lob it back beyond the keeper to make it all square again.